There are a wide variety of tennis programs for adults in the Shreveport-Bossier area.  Follow these links to learn about them: 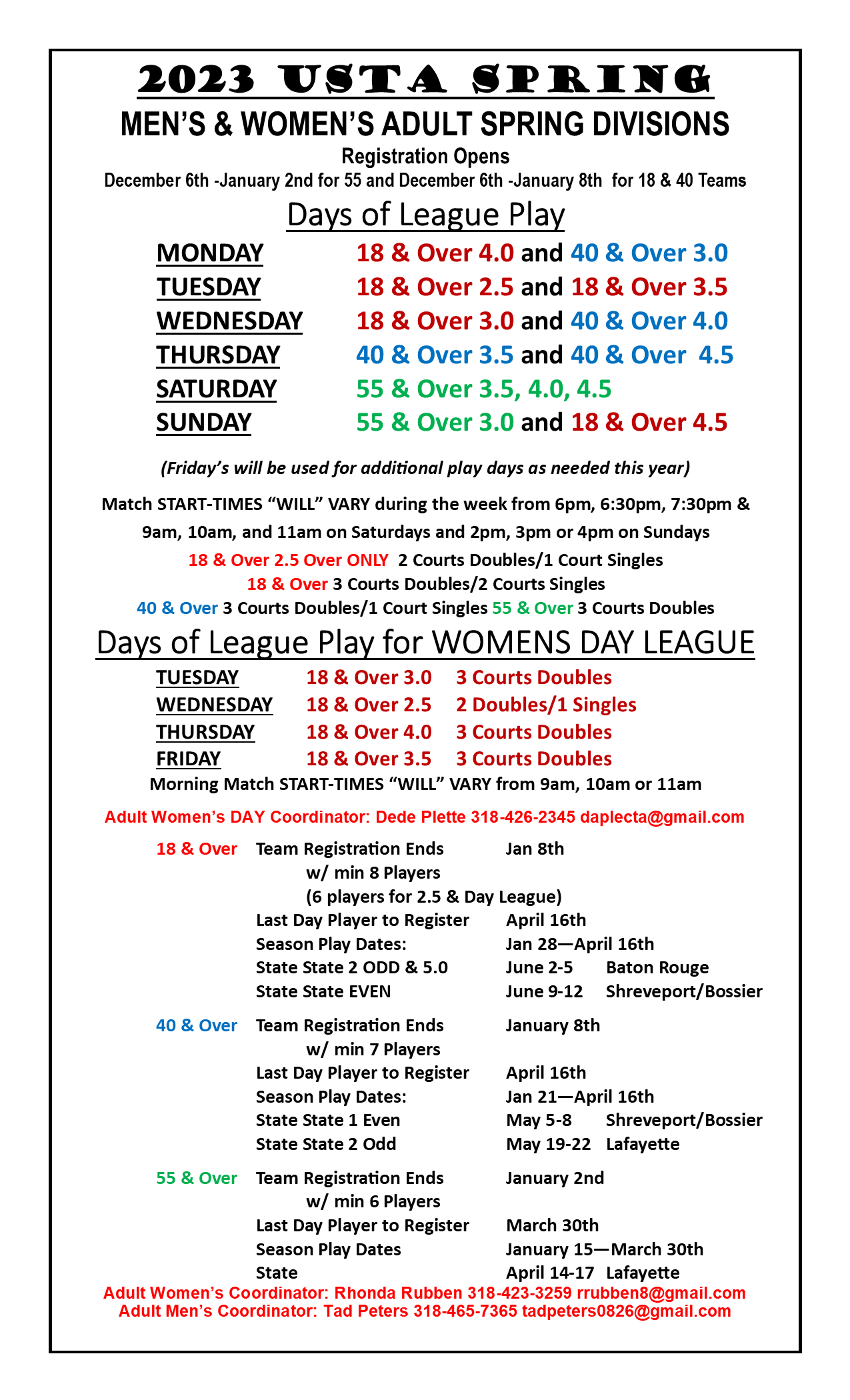 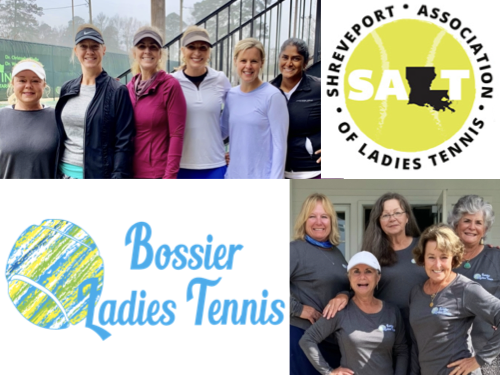 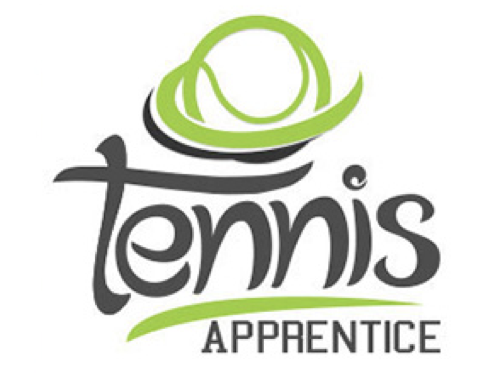 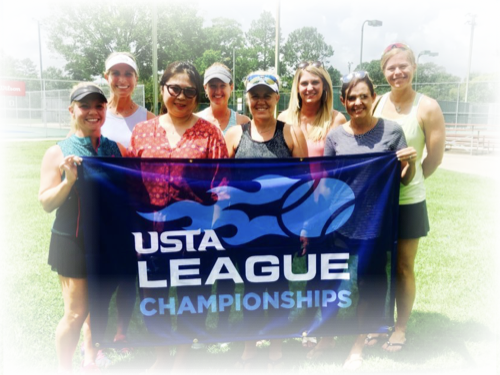 Looking for a USTA Team?

Tennis Apprentice is the largest beginner adult tennis program in the South! The program is designed to introduce tennis to adults (18 & over). Hundreds of adult beginners have participated in these programs all over the state.  We invite you to step out on the tennis courts!

LOOKING FOR A USTA TEAM?

If you are a player who would like to participate in league and would like to find and register for a league team in the Shreveport-Bossier area click here to fill out a form where captains will be alerted to your availability.

With more than 300,000 players taking part each year, USTA League is the country’s largest adult competitive tennis league. It’s a great way to stay active, improve your tennis game, and have the chance to compete for a National Championship. If you love tennis, you’ll love USTA League and being part of a team.

League play starts at the local level for players 18-and-over, and are largely organized according to the National Tennis Rating Program (NTRP) by age group. Top teams from local leagues earn the chance to compete in district and/or sectional championships, while the winners of sectionals  advance to USTA League National Championships.

If you are new to tennis, click here to get started by joining the USTA, self-rating, joining a team, and using TennisLink.

Participation requirements at time of enrollment include:

USTA League is organized, competitive team play for women and men of all abilities and experience. Teams and matches are set up according to NTRP ratings, so your teammates and opponents will be at your skill level. The competition is exciting, but the atmosphere is social.

Format: Teams consist of a minimum of five to eight players, depending on division/level. Team matches consist of both singles and doubles, except 55 & Over which consists of doubles only.

The USTA Spring Women's League provides daytime play for those who can't play during the evening.  Teams play 3 courts of doubles at their ranking 2.5, 3.0, 3.5, or 4.0. Click here for the latest Women’s Day Spring Flyer and information or contact Women’s Spring Coordinator Rhonda Rubben at (318) 423-3259 or rrubben8@gmail.com

If you want to play with friends at different NTRP levels, or if you are having a hard time getting enough people of the same level to form a team, Tri-Level is for you. This socially competitive league is a great way to enjoy the camaraderie of friends in the ultimate team experience.

What is Tri-Level?
• A team match consists of three individual doubles matches: one doubles match at three different levels (Example, one 3.0 doubles, one 3.5 doubles and one 4.0 doubles = Tri-Level team)
• You will play best 2 out of 3 sets, with the 3rd set being a 10 point tie break.
• Leagues are required to play a minimum of three matches.
• Players will have to play a minimum of one match to qualify for the State Tournament (One match can be a default.)
• Players may play at their NTRP rated level or one level higher.
• Participation does not affect player’s NTRP rating.

Click here for the latest Tri Level Flyer and information.

For more information you can contact Tri-Level Coordinator Kirita Windham at kfwindham@gmail.com

USTA Mixed Doubles is like USTA Spring League Tennis in that it offers competitive team play for all abilities and experience, except women and men play together.

Format: Team matches consist of three courts of doubles. Teams and matches are set up according to “Combined NTRP Rating” of the partners.

For information on the mixed-level leagues click here for the flyer or contact Mixed League Coordinator Tammie Harris 318-426-6327 tammiegharris@gmail.com

Combo Doubles is team play that allows players to combine at different levels and compete. It is great fun to play on the same court with friends who are at different NTRP levels.

Format: Three courts of doubles are played for each team match at the combined NTRP levels.

The USTA Combo League is a fall league for men and women and is the fastest growing league in the South!

If you don’t have the time, we’ve got the league for you. USTA Flex Leagues package all the thrills of organized league tennis into a flexible schedule. Maybe you can’t commit to every Wednesday at 8:00 p.m. Maybe Tuesday of next week works better for you— or Thursday, the week after that. With Flex Leagues, it’s your call. The Flex League format groups players of similar ability together in an organized seven to ten week league that allows participants to schedule matches on their own terms. Players register, view schedules, report scores and track standings at ustaflex.com.

How does it work?
Search for a league in your area and register for a flight. If your search shows no results, you can submit your email to be notified when a league opens in your area. When registration closes, the Local Tennis Organizer will schedule the flights. When your schedule is published, you will receive an email that tells you how to view your schedule and contact information of your opponents. If there is a calendar icon next to a player’s name, the player has used the availability calendar/comment box to indicate preferred days/times/sites for matches or to show times of unavailability. Players must email/phone to confirm day/time/site of match. Either player may enter the score after the match is played but typically the winner does.

What does it cost to play?
USTA Member ($25);
non-USTA member ($35)
The “home” player is required to supply the balls, arrange for a court, and pay if necessary for the court time unless both players agree to another arrangement.

Where can I play my matches?
We’re flexible. You make the call. The Home player usually offers the first location but many times the players agree to “meet in the middle” to be more convenient for both.

What format of play is used?
Local option decides if league plays best of three sets or a 10 point match tiebreak in lieu of a third set.

What levels of play are offered in my area?
All flights are based on the NTR levels so you know you will be playing against players of a similar ability level. Search by state and metro area to see which flights are offered in your area each season. Whether you are starting up, getting back in the swing of things, or a seasoned veteran there is a flight for you.